Life on the San Quintín Bay…

Everywhere I have lived and traveled in Baja and the people I have met and gotten to know holds a special memory or memories in my heart and soul. It seems like lately, this past year plus a few months to be more accurate, I have been vacillating between stress and laziness, and writing has not come as easily as usually does with the inspiration of such a majestic place. So I will share a little story from a few years ago of one such special place and neighbors.

The Beauty Of It

Jesus and Chebo have a small ranch along the road between me and town. Their cement house is palapa-roofed and has the usual assortment of lean-to add-ons for comfort. There is a little shaded veranda under a Brazilian pepper tree that might have sprouted before the English farmers failed in the nineteen-teens.

The menagerie collects, usually, under the peppertree shade next to the house at its downwind end just off the dusty two-track.

The two men are half-brothers and have wives and kids, are somewhere in their late 40s, and they keep cattle, goats, pigs and chickens there on the property. There are several dogs that live there, too. Some hardy, some a bit run-down and mange-ridden. Still, everybody always looks happy when I go by.

I once saw one old cat in the mix of animals that are always in the roadside next to the house. An old male, it looked like a survivor but a part of the extended family.

I often stop as the older brother, Jesus, likes to visit with Flash and get him to shake ‘paws’. Flash usually gives a little whine and wag of the tail if he sees Jesus as we are going up the road and then looks over from the passenger seat at me like “Aren’t we going to stop? Don’t be rude, Daniel. I know you are going to stop.”

Flash is like that, he tries to direct the direction of the director in hopes of one day actually chasing a rabbit across the fields in the Jeep. As fast as he is, he cannot catch one alone.

I haven’t acquiesced to his rabbit-chasing addiction, but we do stop and visit folks on his queue at times. Jesus says he rides like ‘un hombre grande’; sitting upright, head up, observant and calculating in his seat.

Yesterday, Chebo was tending a small mixed group of goats and cattle that were free grazing in a weed choked field not far from their pens. He was leaning on his staff and slurping down a Bud Light as we rolled up.

I stopped to chat a bit (he doesn’t say much to Flash) and we started talking about goats. I was interested in how much one of the kids could eat and how many, say, and how long it might take to clear a half-hectare of weeds to the nubs. He said two medium goats could do it in a couple weeks. Always the upsell.

The kids are 700 pesos and the yearlings ready for the grill are 1,500. I said fattening them up myself and getting the yard mowed sounds cheaper in the long run. He laughed and agreed.

Though the valley is full of weeds from the decent rains this winter, I invited him to bring his goats by anytime, I have plenty of work for them. He replied, “It’s a mile away and a long walk, they’ll work off what they eat by the time I get them home.”

His Bud Light fell to the roadside empty and I handed him a cold Corona. “No mas bueno de esta” I said, pointing to the empty, “pero es frio y suficiente”. Again, he laughed and agreed.

I stop at times and share some fresh fish with them and know if I needed it, they’d have no problem passing me a chicken or two, some eggs or maybe even a goat.

There is little noise here but the natural; an occasional passing car on the road so rough it is a part of the Baja 1000 course, and passes the ‘drive’ 100 yards to the east of the house, or the hum of the pangas passing in the bay, going fishing or returning from.

Once a week or so, a plane’s propeller cuts the air overhead and on very calm days I can hear the trucks on the road to La Chorera, some three miles or so across the bay though sounding like they are pulling up a driveway that doesn’t exist.

And I can hear the muffled thump thump of the usual Latin beat reflecting across the still night water from the Old Mill in the evenings as patrons enjoy happy hour.

But mostly, it’s birds of all kinds; the winter brant geese and resident pipers, cormorants, seagulls, terns, birds of prey, jays, wrens, quail and dove, to name a few, that provide the soundtrack that runs day and night here on the bay.

The view is often jarringly beautiful in its trance-producing majesty; the bayscape backed by volcanoes hosts brilliant sunsets from the west and reflects clear when the sun rises in the east unabated by cloud cover while highlighting every mountainside detail in the yet unfussed morning air.

It may get cold and blustery one week and stifling warm another here, but that is just the weather. The place and the people are the difference.

That’s the beauty of it. 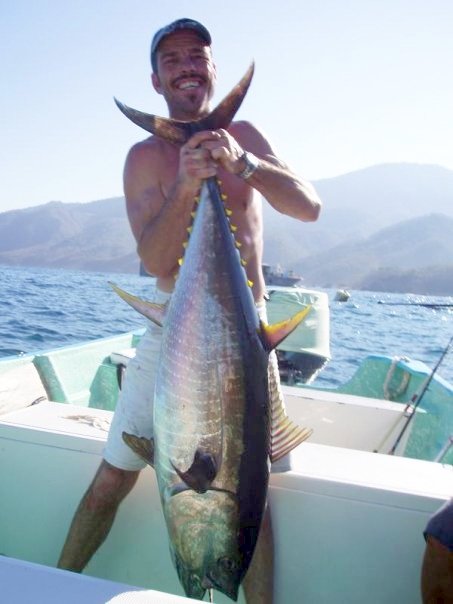 The author is a self described “rambler, rake, poet, writer, nature freak, philosopher, construction guy, dog lovin’ word geek who does most anything outside of the box…”

Daniel has proven himself quite adept at writing as well as fishing from a kayak and has been frequently published in the San Diego Reader as well as other print and online media sites.

His writing style has attracted many followers, generally focusing on fishing and the slow pace of life south of the border on the Baja Peninsula with his faithful, four footed companion – Flash.